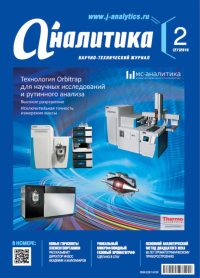 The potable water quality affects human health; therefore, special attention is given to the development and improvement of methods for detecting its composition. Today different measurement procedures are used for this purpose, but the search for the most informative, rapid and cost-effective one keeps on. This paper studies possibilities and prospects for application of LIBS method (laser induced breakdown spectroscopy) in its implementation with a serial LEA-S500 laser analyzer for quantitative measurement of various chemical elements in potable water. Comparison was made with the techniques known as the most efficient: atomic spectrometry and mass spectrometry with inductively coupled plasma.

Issue #2/2016 V.Kopachevsky, V.Boykov, M.Krivosheeva, L.Bobrova, G.Astrovskaya
Assessment of the potable water mineral composition using LIBS technique
The potable water quality affects human health; therefore, special attention is given to the development and improvement of methods for detecting its composition. Today different measurement procedures are used for this purpose, but the search for the most informative, rapid and cost-effective one keeps on. This paper studies possibilities and prospects for application of LIBS method (laser induced breakdown spectroscopy) in its implementation with a serial LEA-S500 laser analyzer for quantitative measurement of various chemical elements in potable water. Comparison was made with the techniques known as the most efficient: atomic spectrometry and mass spectrometry with inductively coupled plasma.
Теги:   analysis of chemical elements   laser induced breakdown spectroscopy   libs   potable water   лазерно-искровая эмиссионная спектрометрия   лиэс   питьевая вода   элементный анализ
Analytical methods for testing mineral composition of potable water are very diverse. Optical emission spectrometry ICP-OES [1, 2] and mass spectrometry with inductively coupled plasma ICP-MS [3] are recognized as the most sensitive ones and cover a large number of analyzed chemical elements. In these techniques, potable water samples in liquid phase are used, and samples are prepared for measurements with mandatory use of acids. Nitric acid is used for sample preservation after their taking; nitric acid or chlorazotic acid is used for their further leaching, which is intended to transform the elements being tested into a soluble state. This procedure is described in particular standards [4, 5]. Recommended leaching time for detecting elements is at least 120 to 480 min in an open system and at least 10 to 480 min in a closed system (at the temperature and pressure increase). Mass concentration after leaching does not represent the total mass concentration of element in the original sample in all cases as it is specified in standards [1, 3–5]. Only the elements are tested, which are recovered from the sample during leaching. Some of elements and compounds corresponding to them (silicates, aluminum and titanium oxides) are not completely recovered by the procedure described, and, if it is necessary to test them in the residue, it is recommended to dissolve it in hydrofluoric acid. Decomposition of tin and titanium compounds is a separate procedure with using other reagents. While measuring the content of Ag, Bi, Sb, Sn and Zr with typical sedimentation of their compounds yet during the sampling stage, it is necessary to prepare an additional sample with adding of hydrochloric acid. These factors complicate, delay and increase the cost of the testing procedure. We have developed the measurement procedure for the potable water dry residue by LIBS technique using a serial LEA-S500 laser analyzer, which is free from the problems connected with dissolving of the elements being tested. It is intended for recently taken samples not preserved with an acid and is targeted to obtain the most exhaustive non-distorted data about elemental composition of tested water. During sample evaporation, sediment homogenization takes place; and its crystallization on container walls is blocked. Testing with a laser analyzer takes less then 15 mg of dry residue; that’s why, the developed technique is highly competitive with the above considered ICP-OES and ICP-MS with regard to the promptness of preparation of a potable water sample. Dry reside is compacted into a tablet up to 4 mm in diameter, which, in turn, is shrunk in a bigger tablet, for example, from polyvinyl alcohol used as a substrate (carrier). Using the same way, tablets are prepared that contain artificial mixtures to calibrate the instrument (for example, based on calcium carbonate and chloride, magnesium, sodium and potassium sulfate), which simulate the basic composition of dry residue with or without different micro element additives.

In procedures [1–3], such components of the mineral constituent as O, H, Cl and N are strongly shielded by water itself and used acids; that’s why they could not be detected (Table 1). During the dry residue test using LIBS technique, their measurement is carried out with relating weight fractions of many tested elements to 100%. Measurements are carried out in the argon medium.

In the simplified method version while operating LEA-S500 in atmospheric air (without use of the argon), precise identification of the contribution made by oxygen in dry residue is difficult while the nitrogen signal is shielded by air yet more than the oxygen signal. It is the only component in this case not subjected to measurement and accounting in the total sum of weight fractions, although, as a rule, its low concentration in the sample does not add significant uncertainty into measurement results for other components. As per oxygen, it is measured indirectly owing to the following analytical signals: carbon – as one associated with carbonates and bicarbonates in a sample (as well as organic compounds), sulfur – as one associated with sulfates, phosphorus – associated with phosphates, hydrogen – first of all, associated with hydration water of dry residue. Obviously, hydrogen concentration changes (increases) the most in dry residue as compared with mineral component in the liquid state. Significant change (decrease) by evaporation approximately two times according to [6]) is also typical for the carbon being the part of bicarbonates and carbonates.

Table 2 contains detection limits for some voluntary selected elements in potable water using LEA-S500 as compared with other analytical techniques. The recovery degree during measurement was checked for all specified elements using a spiking test. It was 90-105 %. It is obvious that the LIBS technique surpasses other ones considering detection limits while testing potable by dry residue.

The entire range of tested elements by ICP-OES [1, 2] and its extension according to Table 1 (totally 40 elements) should be referred to the LIBS technique as an atomic-emission one. The entire measurement range of ISCP-MS technique [3] (62 elements) may be considered as tested ones. This range includes REE, which are featured by the lowest ever detection limits (about 0.1 µg/l) using ISP-MS. The latest XLD values (≤1 ppm) obtained using LEA-S500 instrument for solid samples makes this technique competitive with ICP-MS measurement for REE content in potable water.

There is every reason to assume that the developed measurement procedure for element concentration in the dry residue using the LIBS technique will serve as one of the most significant information source concerning mineral composition of potable water during its application in practice.